It was Tuesday, September 15. I was driving on Highway 50 to the Pacific Ranger Station at Pollock Pines to pick up my permit for the Desolation Wilderness for the week. From as far away as Sacramento, I could see the smoke from the fire in the distance, growing larger the closer I got to Pollock Pines.

The King Fire had just started on Sunday, but was growing rapidly with southwesterly winds and continued dry weather. I pulled into the Ranger Station to find an exodus of vehicles leaving the station. The office personnel had already evacuated and the smoke and flames were just behind the station. One half mile down the road it was growing rapidly with fire crews gathering roadside, ready to do battle with the wildfire. I still needed a permit from the Ranger Station in South Lake Tahoe, so change course for the USFS South Lake Tahoe Basin Management Unit Offices on College Ave. When filling out my itinerary for the permit, the young lady behind the counter informed me that they had just had a fire reported at Fontanillis Lake, my intended first night’s campsite. An illegal campfire that was quickly contained by USFS personnel. My intentions were to still make the trip. 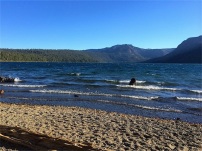 I spent the night at Fallen Leaf campground trying to find out the most efficient way of getting to the trailhead in the morning and how I was going to get back to my car. I picked up a senior discount card for the campgrounds which helped quite a bit. $10 for lifetime gets me half off federal campground fees. It’s about time we started getting some discounts around here for our age.

My hike itinerary was to enter the wilderness at Bayview campground across from inspiration point overlooking Emerald Bay, going over Maggie Peaks down to Fontinillis Lake for the night. It was a pretty steep climb going up Maggie Peaks; I’ve done it before in April in snowshoes and it took me a lot longer but it was fairly strenuous this time with the 25 to 28 pound backpack on my back. 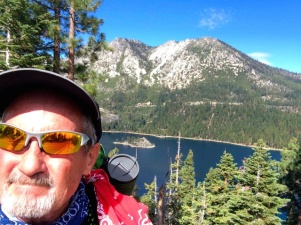 Parking at the Tallac trailhead at Highway 89, I had about 5 miles of a hike to get to the Bayview trailhead. I started thumbing a ride but was all in vain, even with my pretty legs I could not get a ride. I was beginning to think I couldn’t get laid if I smeared myself in bananas and jumped into a gorilla pit with a bunch of female gorillas in heat! Don’t know how long it took me but it was a long time, and it was warm and I took a lot of breaks. There were a couple of sections of 7-8% grades on the highway with very little or no shoulder. I remembered so well when riding my bike around the lake many times. I finally reached the Bayview trailhead by about 11 AM.

The trailhead is about 300 yards from Highway 89 through the Bayview campground. Right off the bat, the trail starts at a 7 to 10% grade. Many switchbacks through the wooded area finally brings you to a clearing, with a nice view of Lake Tahoe.

View of SLT from trail 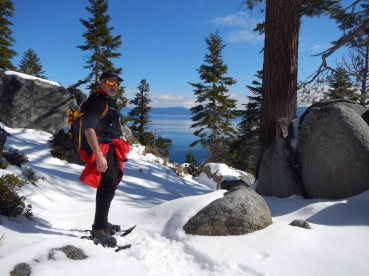 Another hundred feet of the trail brings you to a wonderful view of Emerald Bay. 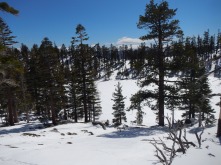 Another half mile or so brings you to Granite Lake. While still semi-frozen in April, September it was nice and cool to get a drink from and wash my face. I carry the Sawyer Mini water filter with collapsable 1 liter bags. Only 2 ounces for the filter, comes with a straw for sipping out of the lake or stream.

By the time I reached the pass between the two peaks the Pyrocumulus clouds of smoke from the King Fire was becoming more ominous. 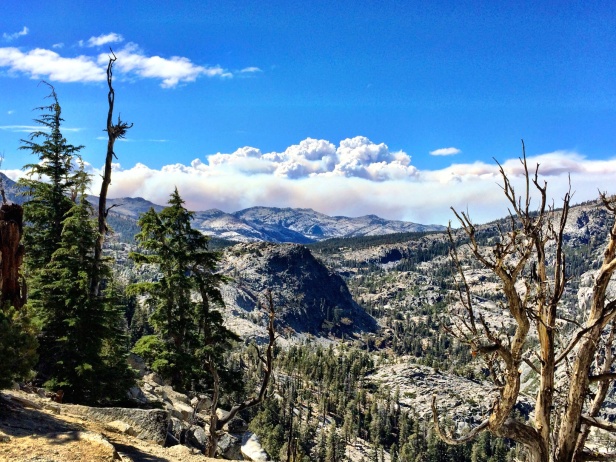 I kept trudging on though, only meeting a couple of people on the way up, and one young trail runner girl who passed me going down to Azure Lake. Not too far from Fontanillis lake, my destination for the night, I met another big guy with a sizable backpack coming back up the mountain stopped to chat for a while.

He told me he had just come over Dicks Pass to see an illegal campfire on the west side of Dicks Lake. It got out of hand from the two idiots that started it. He said some other backpackers and pitched in with a bucket brigade trying to extinguish the fire but with little luck. We discussed my route beyond Fontanillis which would’ve been over Dicks Pass to Gilmore Lake for the next night, summiting Mt. Tallac on Friday, then returning to my car at the Tallac Trailhead. He cautioned me to reconsider my decision to stay at Fontanillis saying the heavily wooded path and 1,400 foot climb back up over Dicks would have left me little margin for error as an escape route. After hiking about another hundred yards after he and I parted our ways, I stood staring at the enormous clouds of smoke from the King Fire. I then pondered the routes to get out of Desolation if something went horribly wrong. Since Dick’s Pass would’ve been blocked by fire the only other routes were to continue onto Velma Lakes and Phipps Pass or back the way I came over Maggie’s Pass. 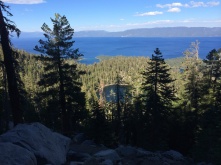 Northwest side of Mt. Tallac 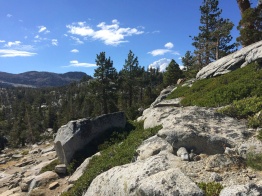 I ended up choosing the latter, backtracking from where I came at the Bayview Trailhead. (You will see the pictures of the smoke when I reached Maggie Peaks again from 8,400 feet.) 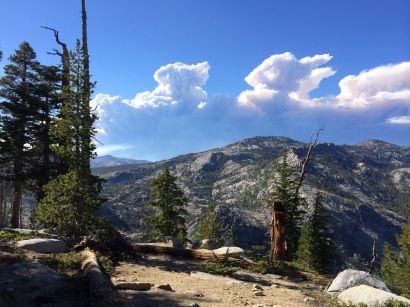 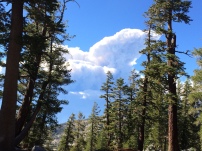 Without a ride, I hoofed it all the way back to my car at the Mt. Tallac Trailhead, then drove to Fallen Leaf Lake Campground to get a campsite for the night. Today I made the right decision to abort my original plan.

As it turned out, that was a really good thing, as I realized Fallen Leaf Campground had hot showers… Just four quarters gave me three minutes of a nice hot water shower, giving back the trail dirt I had borrowed that day. I ate a nice trail dinner and was fast asleep by 1930 that night.

See ya on my next adventure in the Tahoe Wilderness 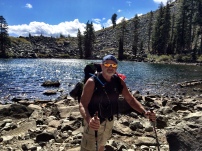 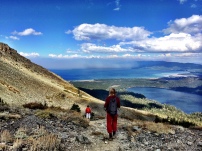 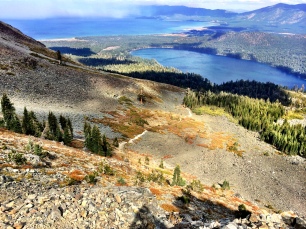 The Marmot on Relay Peak 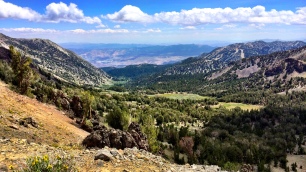 East to Washoe and Carson Valley 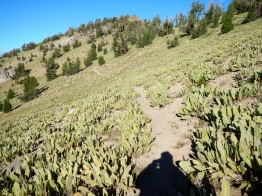 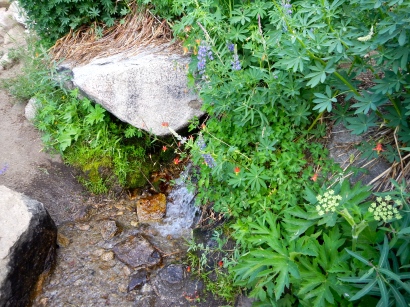 Marlette in the early morning sun 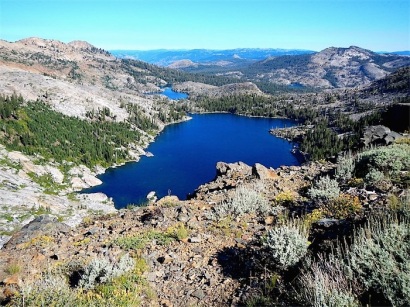 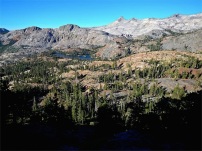 From west side of the lake 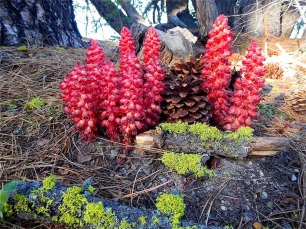 Need to think about this… 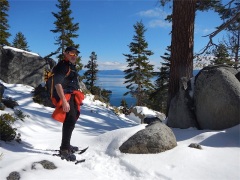 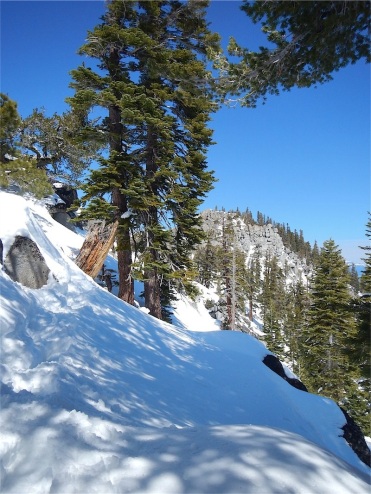 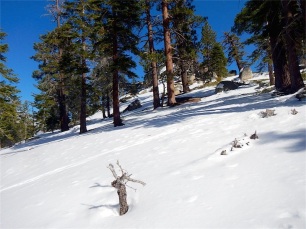 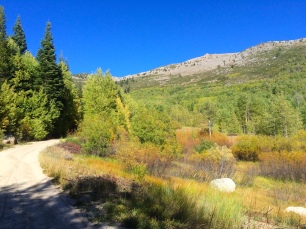 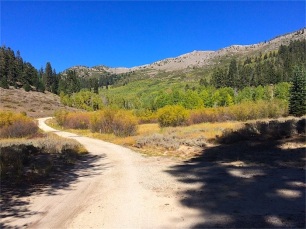 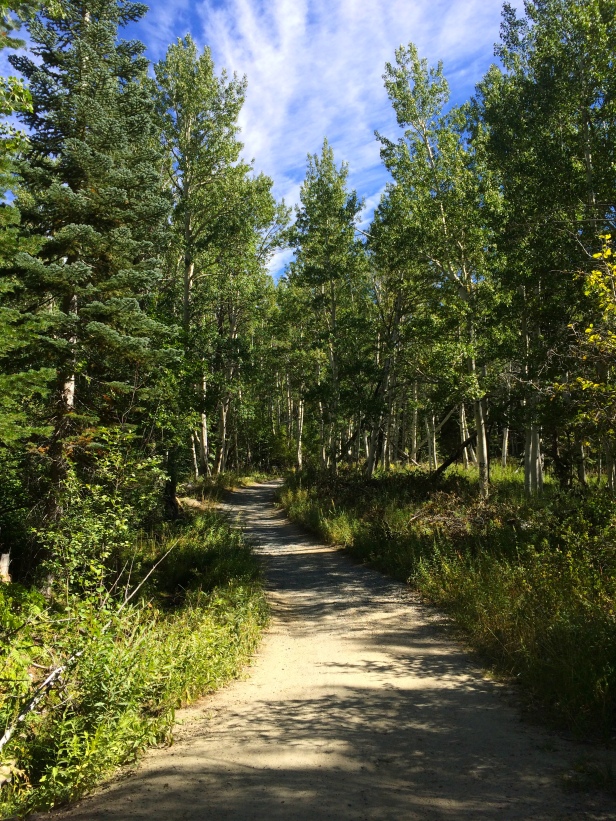